A report is published summarising the conclusions from the operation of 2 hydrogen fuel cell buses operated by Syntus Gelderland, utilising the Arnhem hydrogen refuelling station deployed as part of the H2Nodes project. 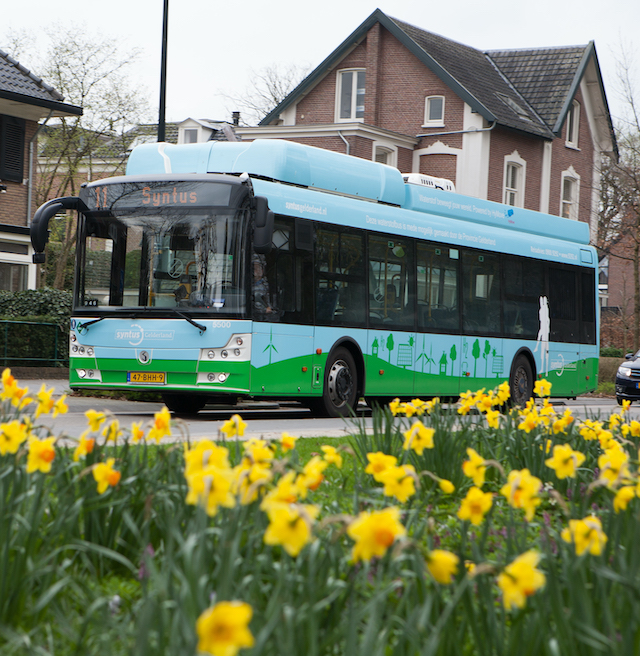 Following on from the 1st project involving hydrogen buses undertaken between 2015 - 2017, a 2-bus project was started in September 2018, under the service provided by Keolis . With this project, the existing Solbus from the earlier project was deployed, alongside a new hydrogen-powered bus from Ursus, built as a forerunner to serial production.

The buses operate in regional public transport, mainly on longer journeys of approx. 90 km including several sections of motorway travel. Refuelling journeys to Arnhem are also completed via the motorway. The average daily speed is approx. 50 km/h. The deployment availability of the Solbus was 96% and the Ursus bus 92%, comparable to the rates achieved by diesel buses. This includes the refuelling journeys, each lasting 2 hours.

Consumption by the Solbus is 6.1 kg hydrogen/100 km, irrespective of the season. For the Ursus bus, consumption in the winter months is 2.2 kg/100 km. This is higher due to the use of the electric heater. Consumption is approx. 40% lower (4 kg/100 km) than for the hydrogen buses referred to in the final report of the European project HIGH V.LO-CITY, with information about projects in various European cities.

The leasing of buses including maintenance and fuel is a new concept for the operator. There are still needs to improve the daily hydrogen supply, which at this stage still presents some challenges. A realistic estimate for the total cost of ownership (TCO) for a hydrogen bus was considered at € 0.99 per kilometre by the report’s authors. This is based on 100,000 km per year, 2.5% interest, a purchase price of € 475,000 and a standardised green hydrogen price of € 5 per kg.

In summary, the report’s authors concluded that the hydrogen buses selected by Keolis can be deployed problem-free in public transport operation. This is because thanks to their large operating radius and short refuelling times, these hydrogen buses can be a one to one replacement for diesel or CNG buses. The flexible deployment capacity of these buses means that no adjustments have to be made to the timetable, and as the need arises, they can be deployed to replace any other bus in public transport operation. Finally, they found that the extremely low hydrogen consumption resulted in such a low TCO that the threshold for switching from conventional buses to hydrogen buses should be relatively low.

Read the full report here (link to ‘publications’ page). The translation of the report was sponsored by the Dutch Ministry of Infrastructure and Water Management as part of the H2Nodes project.