H2Nodes aims to support the growth of new hydrogen infrastructure in Arnhem, Riga and Pärnu, centred on the development of strong local activity by engaging key stakeholders, fostering a positive market-led route to clean urban transport and rising numbers of FCEVs along the TEN-T corridors.

H2Nodes is developing hydrogen as an innovative technical solution with a focus on public transport, optimising existing bus and trolleybus route networks, promoting public transport and reducing pollution and greenhouse gas emissions. When using hydrogen as a fuel, vehicles produce zero harmful tail pipe emissions, with water vapour being their only by-product. Hydrogen also has the benefit of significantly reduced noise emissions, as well as range and refuelling times comparable to diesel equivalents. This enables sufficient operational flexibility for hydrogen to be used as a direct replacement to diesel for public transport such as buses.

Hydrogen is a very versatile fuel that can be generated from a wide range of sources, including renewable. Even when hydrogen is generated from natural gas, as it is done conventionally, the fuel cell can significantly reduce the amount of carbon emissions compared to a diesel engine. When produced from low carbon sources (renewable, biomass or nuclear energy), the carbon emissions are completely eliminated.

Prior to the H2Nodes project, existing deployments of hydrogen infrastructure have typically been made with focus on technology rather than a market-led approach to foster demand for the fuel. There is a growing consensus in the industry that the time is now for moving the focal point from technology push towards market pull. H2Nodes is using this demand-led focus to develop clean transport on the North Sea - Baltic core network corridor.

1. Studies to map the locally available pathways for hydrogen production from renewable energy sources and establish the provision of hydrogen for real life tests
2. Build and real-life testing of HRS in Riga, Pärnu and Arnhem and plan for additional HRS capacity of these cities. Planning for continued expansion with more HRS will be taken up with other regions along the corridor.
3. Hydrogen busses and cars will be tested at the HRS. Further growth of the hydrogen vehicle fleet will be pursued by mobilisation of local and regional actors to engage in building the business case throughout the value chain

Hydrogen deployment and funding within Europe 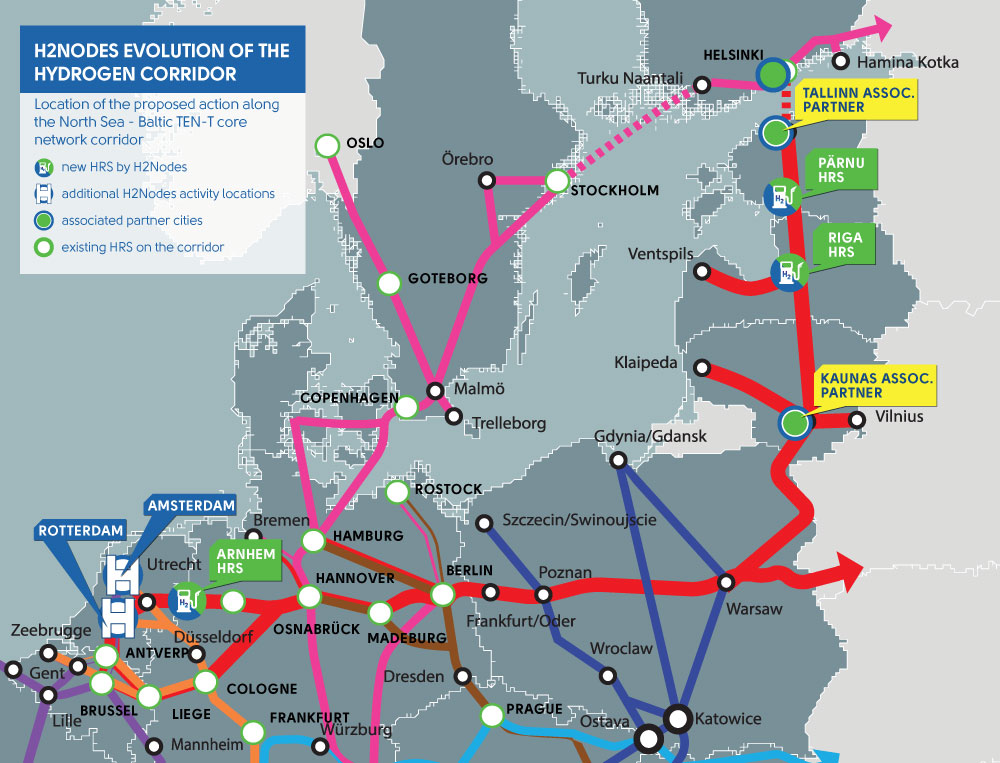 H2Nodes was developed as part of a Global Project to facilitate the development of an interconnected network of Hydrogen Refuelling Stations (HRS) along Europe’s core transport network corridors connecting the major urban areas to enable long distance travel with Fuel Cell Electric Vehicles (FCEV). H2Nodes supports the Global Project with bottom-up demand driven regional development for clean transport in and between the partner cities.

The Trans-European Transport Network (TEN-T) is a European policy that addresses the implementation and development of a Europe-wide network of railway lines, roads, inland waterways, maritime shipping routes, ports, airports and railroad terminals. Besides the construction of new physical infrastructure, the TEN-T policy supports the application of innovation, new technologies and digital solutions to all modes of transport. The objective is improved use of infrastructure, reduced environmental impact of transport, enhanced energy efficiency and increased safety.

The Connecting Europe Facility (CEF) is the EU funding instrument for strategic investment in transport, energy and digital infrastructure. In the transport sector, CEF is dedicated to the implementation of the TEN-T and aims at supporting investments in cross-border connections, missing links as well as promoting sustainability and digitalisation. During the period 2014-2019, CEF Transport has awarded EUR 23.3 billion in grants to co-finance projects of common interest. The Innovation and Networks Executive Agency (INEA) manages the technical and financial implementation of parts of the CEF Programme, Horizon 2020 and previous programmes (TEN-T 2007-2013, Marco Polo). 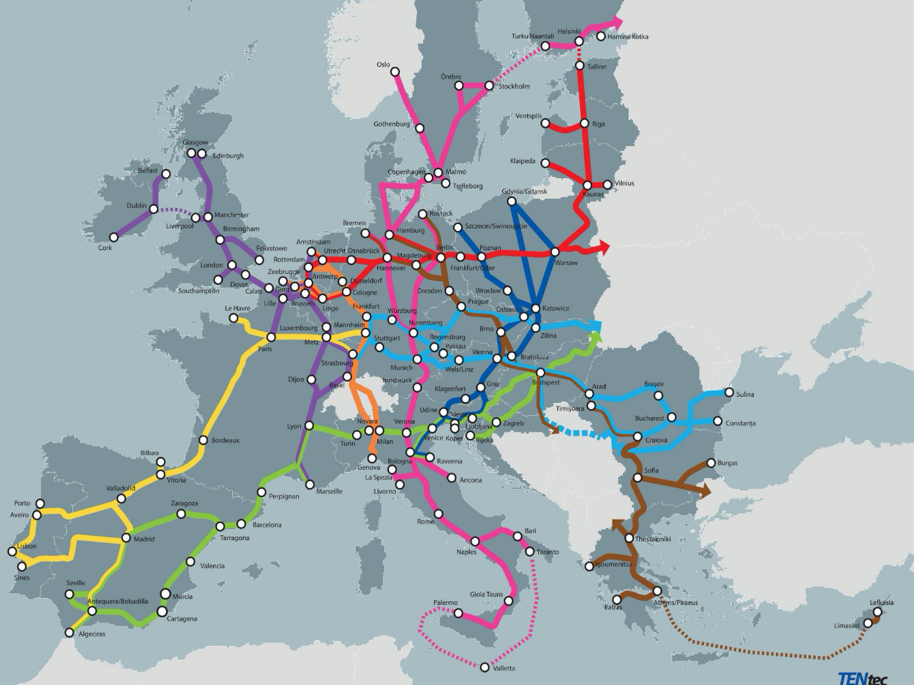 H2Nodes envisages coordinated improvements to transport infrastructure at these Urban Nodes fostering the development of integrated and intermodal clean transport across the transport network corridor in the future. Hydrogen infrastructure is being deployed at three strategic locations along the North Sea – Baltic core corridor.