Wire-free trams that run on hydrogen fuel could be the solution to Bath’s transport problems, according to a lobby group. 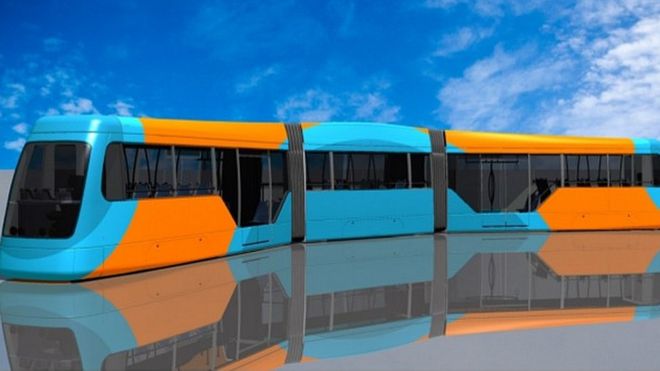 Bath Area Trams Association said the technology could be implemented without any cost to the taxpayer. The group is in talks with American firm TIG/m, which has a track record in building and operating trams. Bath council said it would be looking at whether a new mass transit system was possible for the city.

Dave Andrews, spokesman for Bath Area Trams Association, said: “The overhead wire-free, hydrogen tram would be ideal for Bath. “At the moment, Baths’ vaults are being damaged by the number of heavy buses in use. But the structural slab on which the tracks would be laid would prevent any further damage.”

TIG/m runs several electric trams across the world and is contracted to build and run hydrogen trams in Dubai and Aruba. The Bath Area Trams Association is now in talks with the company to see if it is possible to build the tram network with private finance.

Mr Andrews said the talks were at an early stage and a feasibility study also needed to be done. His early analysis claims a kilometre of track could be built for £7m, a fraction of the £25m needed for conventional heavy trams, although there would be significant sums on top for legal, engineering and planning work.

Tenbroeke Engineering founder Sherman Havens, who is also working on the project, said the network could be built in three years.

A spokesman for the West of England Combined Authority (Weca) said it had met Bath Area Trams Association and "listened to their proposals".

A 2017 study by Bath and North East Somerset Council found there were “no show stoppers” to prevent the introduction of “some form of light-rail tram system” in Bath.

Professor Graham Parkhust, director of the Centre for Transport and Society at the University of the West of England, said cities should be looking at greener forms of transport such as the trams proposal, but tram networks could not cover as wide an area as buses. "Overall, I think it unlikely that such a complex and politically sensitive scheme would be taken forward by the private sector alone," said Professor Parkhurst. "But there are good reasons why there should be some public involvement, including in terms of funding, to protect the public interest."

Councillor Neil Butters, joint cabinet member for transport services at Bath & North East Somerset Council, said the authority was working with Weca to look at how Bath's public transport could be improved and had commissioned a transport delivery plan. "This will include an evidence-based study for a mass transit system and all options will be considered carefully," he said.

Read more about this story